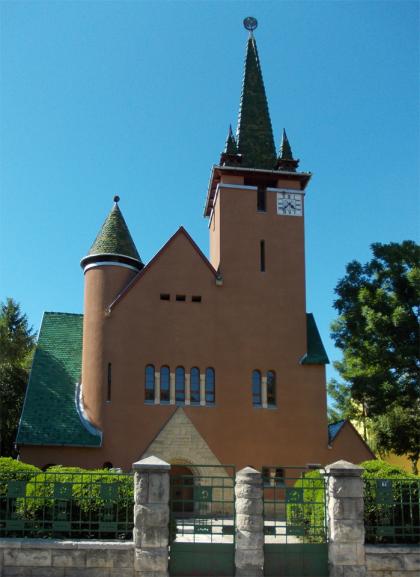 One well-known example of Károly Kós’s works is the reformed church on Calea Mănăștur in Kolozsvár (Cluj). Even at the early stages of construction, this church was a definitively Transylvanian Hungarian product. Here the architect portayed his experience inspired by the wealth of church profiles from the Kalotaszeg region and other folk motifs. Yet in his approach we also notice Secessionist tenors that characterized turn-of-the-century architecture. Modelled after Kalotaszeg’s reformed churches converted from the medieval Catholic churches, its exterior is marked by four turrets, and the interior is decorated with characteristic elements of folk architecture also found in many Kalotaszeg churches (for example in Bánffyhunyad, Magyargyerőmonostor, and Magyarvalkó): painted wood ceiling coffers, pulpit, altar, and pews.
Kós uses these words to describe the process of designing the sacred edifice (Károly Kós, Autobiography):
“At the start of winter, I obtained some nice new architecture work in a peculiar manner. The reorganized and established Kolozsvár-Monostor church parish decided to build a new church on the land it had purchased on Monostor road. It commissioned locally renowned master builder (and entrepreneur) Spada to create the church design. However, some of the presbytery did not like the finished design and, moreover, the construction cost estimate was well over the 100,000 crowns the parish had earmarked for this project. The presbytery therefore sent the plans and budget over to me in Pest requesting that I give my opinion and perhaps even provide some suggestions. I did not like the design… This opinion I justified in writing, but instead of suggestions, I prepared a draft plan of a church with equal holding capacity, the final cost of which was within 100,000 crowns.
The church parish accepted my estimate as well as my proposed plan, and commissioned me to prepare the final construction plans.” (1912).

Construction began in early summer of 1913, and by the end of that same year the roof was up.

The most significant decorative element of the church—seen in the carved capitals, the spire decoration, the lamp blueprints, and the wrought iron fence—is also a favourite folk motif that gives the church its popular name: the rooster. Kós understood both the folk beliefs and universal symbolism of the rooster: Because its crowing announces the rising sun, the rooster is the bird of light and dawn that symbolizes nascent spiritual enlightenment; the rooster is also the symbol of fame, vigilance, and thoughtfulness; it brings good luck; and it is a prominent symbol in many religions and faiths, including Christianity.

The church is oriented along a north-south axis. Its floor plan is reminiscent of the Roman basilica: a higher nave and two lower-ceilinged side-aisles with a straight closure apse at the end. Since this is a reformed church, the apse does not have a special function; thus, separated from the nave by a wall, it serves as council hall. On the south end the nave adjoins a narthex, where we also find staircases to the tower and the balcony. A small square-shaped portico adjoins the western façade.
The square-shaped, tall tower with its four turrets is a defining element of the main façade and the entire church, while on the other side, a circular tower serves to preserve and express balance and harmony. Both towers also have a functional role: The big tower holds stairs to the balcony and the belfry, while the circular tower’s stairs provide an alternate ascent to the balcony. Under the big tower’s spire, a simple square Roman-numeral clock that barely protrudes from the wall found its spot.
Kós’s focus was to create a homey atmosphere with simple materials, tools, shapes, and motifs that were part of the everyday person’s life. At the same time, he strove for functionality and paid attention to the scope of the surroundings.
Károly Kós also became involved during the exterior restorations in the 1970s. The latest restoration was carried out in 2013, based on architectural restoration plans by Konzol studio and involved replacing the eternit panels on the roof above the nave with green glazed Zsolnay tiles, strengthening the roof structure, and upgrading the electrical network.